I’m going to do what surely almost every other unproductive person is doing right now and blame the heat for my lack of productivity. The heat and a rejuvenating weekend trip to DC have led to a complete lack of momentum on matters both business and personal. No blogging, no article writing for the Patch, not even a box filled for my impending move.

What’s worse, in the last week, I’ve spent a total of an hour cooking time in my own kitchen.

The real tragedy there, aside from missing the cooking time itself, is that every week we’re getting a big supply of fresh from the earth produce through our Garfield Farms CSA. And every week, we come this close to wasting something because we just didn’t move fast enough, we just didn’t make the time, we just didn’t have the time. Every time I have to throw away even half a cup of salad mix, I feel a little sick to my stomach.

Recently I interview a woman for the Patch who runs Victorian tea services from her house and she shared with me her general philosophy regarding the teas. The services are meant to be enjoyed slowly and savored for more than simply their culinary delights. Tea and snacks and the accompanying conversation are the medium to relationship building. When we savor the process as much as the relationship itself, we are truly engaging with one another.

I bring this up not as a great argument for the installation of tea time in the American workplace (although I am a firm supporter of that issue) but as an analogy to what my relationship with the CSA should be. I should be savoring the process of working with what I’ve got more than simply the stuff itself. It’s all well and good to have a beautiful summer squash fresh from the farm, but if I’m not cooking with it, it is simply a totem, a symbol, an idle trinket. I need to savor these weeks with my veggies. These weeks are fleeting and numbered, and besides, I need to learn to save a buck and stick to what I already have in my kitchen instead of going out to the grocery store in a moment of impulse.

Anyway, expect a bit more productivity from me in the coming days. Until then, here’s a look at the CSA goodies from this past week:

Radishes, sweet pepper, mint, and tomatoes (all three of them) 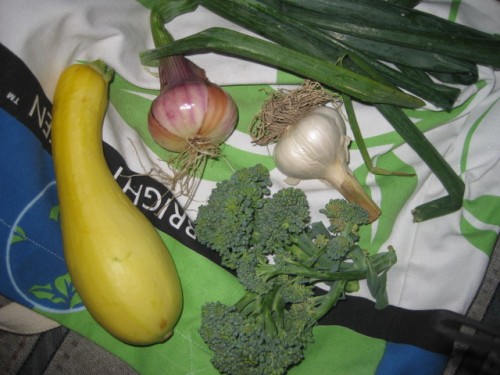 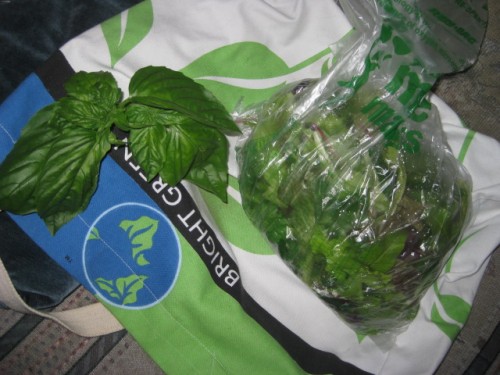 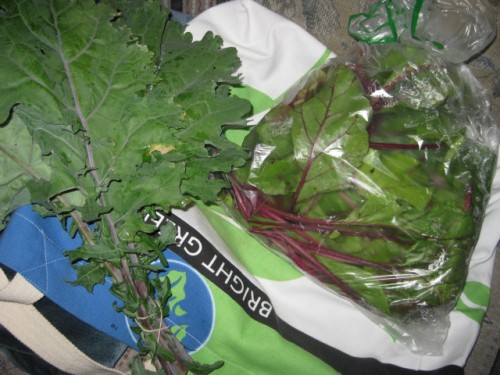 A Tale of Two Salads

Between having guests over on Friday evening, going to a picnic on Saturday, and our usual Sunday brunch-at-home, I feel like I’ve been spending every other hour of my weekend in the kitchen. Which, at least some weekends, is exactly how I like to be spending my time.

I don’t like going empty handed to any function, especially a picnic, so I thought I would whip up two cold salads and then cross my fingers and hope that they would remain tasty even after surpassing room temperature in the outdoor heat. I really need to invest in a proper cooler and cold packs if I’m going to be traveling with food. Luckily for this time around, both dishes survived the mugginess.

The first salad I made was a white bean, radish, and pea salad that was a modified variation of a member-submitted recipe on Chow. The radishes we had gotten in our first CSA had long since been devoured but we still had the half pound of pea pods. Everything else was simple stuff that I had on hand, substituting vegan cream cheese for the recommended tablespoon of yogurt.

The second salad was an improvisation based on both an orzo salad they commonly serve at Zenith and a suggestion from Mike on what to do with all the CSA garlic scapes we had received. The result was a garlicky pesto salad with a touch of oregano. I think it could have used more black pepper, but it was still pretty good. The recipe works the same whatever kind of pesto you want to make, so go with whatever you have on hand. Want an added crunch? Throw in about a half of cup of pine nuts. For non-vegans, a little Parmesan really gives this salad an extra boost of flavor.

– In a bowl, combine shallot, vinegar, oil, lemon juice, and vegan cream cheese. Toss the veggies and herbs in the dressing. Add salt and pepper to taste. Mix until well combined then chill for at least an hour.

– In a food processor or blender, process the garlic, oregano, and olive oil until smooth. Add the garlic pepper to taste. Toss pesto with orzo, tomatoes, and zucchini, until pasta and veggies are well coated. Allow to chill for at least one hour.

I don’t think I’m going to get tired of this. Every Thursday is like Christmas, only instead of reindeer socks that I won’t wear, I’m getting a huge haul of fresh veggies to eat through to next week.

(Oh, and Mom, I’m just joking about the socks. I really like the slippers you gave me this past year, although it does look kind of funny to be wearing Christmas-themed slippers past the holiday itself, but you know me. I don’t mind looking silly.) 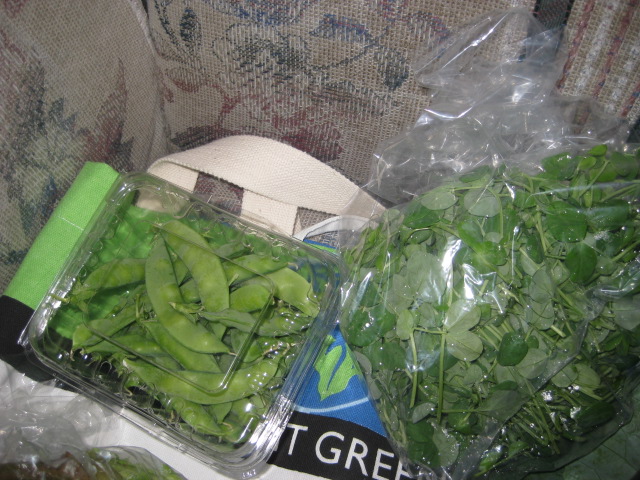 They say that what you cook for yourself and yourself alone is a good indicator of how much you consider your own well-being. While I think there is some truth behind that – after all, if you didn’t care about yourself, you would care little for nourishment even when absolutely required – it’s largely a subjective matter. What one person considers a perfectly adequate meal for one might horrify another solo diner, and these opinions are, for the most part, a matter of taste.

I just finished reading Alone in the Kitchen With Eggplant, a compilation of essays from different writers focusing on the idea of cooking for one, dining out alone, and generally eating by one’s lonesome. Some of the essays took the stance that one should treat themselves to a meal that is on par, if not better, than what they would serve other people, because it’s important to show yourself the same level of consideration and care that you show other people.

That’s all well and good, but I tend to side more with Ann Patchett on the subject. Despite her years of food knowledge and preparation expertise, she is reluctant to put any significant effort into a meal meant only for herself. She writes of subsisting on crackers eaten over the sink, meager yet satisfying meals of odds and ends and non-cooked foods. Despite having the ability to make challenging and delicious cuisine, the last thing she wants to do after the trying experience of cooking that meal is to sit down and eat it. So when it came to feeding herself, she stuck to things that required as little effort as possible.

I don’t exactly eat saltines every night for dinner, but I understand the point. When I’m not cooking for others, I tend to lack the focus and energy to make a complete meal for myself. There are things I’d rather be doing with my time, and besides, I’m very easily satisfied. What’s the point in expelling all the energy, using up all that time, dirtying another dish, another pot, another fork and spoon?

But last Monday night, I felt in a bit of a food rut. I had eaten out a lot the prior week and hadn’t really gotten a whole lot of time in the kitchen, not even on the weekend when I generally do most of my meal-making. I still had quite a bit of produce in my fridge thanks to a Strip District visit the weekend before, and I didn’t have much to do or anywhere to be. I wasn’t even particularly tired.

So I set to making a simple stir fry.  Those of you who already have their chosen stir fry, feel free to ignore this recipe. Those who haven’t found their recipe might want to try mine. I’m not saying it’s the best, but it’s damn satisfying, especially with the addition of the green onion pancake.

Another one of my problems in cooking for myself is that I always end up making way too much, to the point that it’s more than even simple leftover lunch the next day can handle. This recipe yields a quantity big enough to share between two people.

– For rice, prepare as instructed on box.

– Heat vegetable oil in a large, deep pan. Add green onions and sesame oil. Saute until onions are tender, then add peppers and seasonings. Cook for a few minutes longer, than add zucchini and soy sauce. Toss until everything is well coated. Allow to simmer on low heat for ten minutes.

– Cook the pancake in the toaster until lightly browned.

– Assemble your plate: First a scoop of rice, then the pancake. Add extra soy if desired. Then top generously with veggies and leftover sauce from the pan.