Christmas Time is a Hungry Time 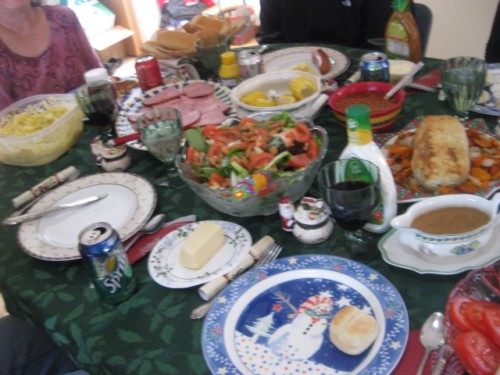 Deck the halls with a ton of food!

My mother has a bad habit of letting me know about family events way too late, so I miss out on a fair amount of family gatherings. Due to short notice, I was regretfully absent from the extended family’s Christmas gathering/cousin’s baby shower the weekend before Christmas. But because my mother was recuperating from surgery through this past weekend, I got a bunch of time in with my immediate family (including my aunt, who is like a second parent to me).

What did we do for three days straight? Chatted, played some games, watched some TV. But mostly we ate. We ate and ate and ate. We munched on snacks through games, we had sandwiches, we had dinner, we had leftovers, we had dessert. We ate till we were full, then as soon as we were a little less full, we ate something else. No wonder people gain weight over the holidays. What are you doing other than sitting around and putting stuff into your body?