Take Out Tacos from Cocina Mendoza 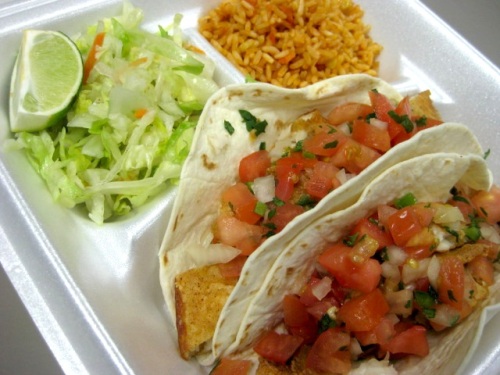 It’s Lenten time once again! I don’t know what this time of year is like in other cities, but in Pittsburgh, even if you’re not remotely religious, you’re bound to notice when Lent comes around. All of a sudden fish is available in every size and preparation, from church-held Friday night fish fries to fish and mac’n’cheese specials at  nearly every bar and restaurant in the area.

One of my most frequented Mexican restaurants, Cocina Mendoza, is serving up my favorite of the Friday fish specials: Fish tacos. I didn’t have the chance to try the tacos last Spring, but struck by a need to get in on the fish fun this past Friday, the first Friday of Lent, I wandered over to the restaurant on my lunch break and grabbed a lunch special to-go.

Cocina Mendoza is tucked away inconspicuously in the Mt. Lebanon Shops. It’s not my favorite place to grab a taco – that would be Las Palmas in Brookline – but it’s still pretty terrific: fresh, authentic Mexican cuisine at decent prices for good portions. I’ve mostly taken advantage of the lunch specials, which for five or six dollars a piece resemble a full dinner portion more than a light lunch option. As I have trying in the last few months to a) save money and b) eat healthier and lighter options for lunch and dinner, I’ve not walked down to the restaurant nearly as much.

I’m glad I did this past Friday. The tacos were delicious. They were two flour tortillas wrapped around several thick slices of fish that were dressed by a fresh salsa. The whitefish was lightly floured and seasoned and fried, a thin, crisp skin giving it prominence even as it was buried under a mound of Pico de Gallo. The bite of the tomato and onion against the mildness of the fish was refreshing, as was the lack of heavier additions, such as cheese or jalapeno or beans. A completely satisfying meal, but far lighter than any of the other lunch options at Cocina Mendoza.

Like many fish specials, it was the sort of thing I wished was around all year. Then again, I suppose I’d take it for granted eventually, when the novelty and anticipation wore off completely. Better to have it contained to just this time of year, when I can look forward to that special every Friday, making this March and April trudge toward a reluctant Spring a little more joyful.

Posted in Dining Out, Food, Lunchtime!