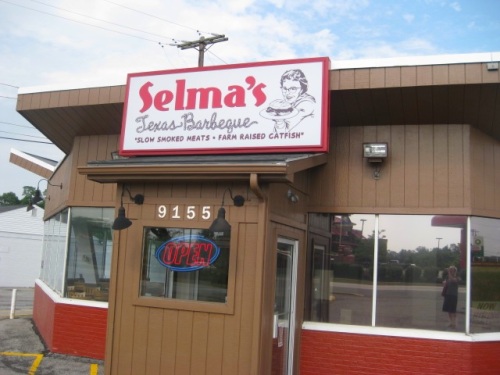 My mother was looking for a drive and some dinner on Sunday night, and I knew, I just knew that barbecue was what she was looking for. So I tooled around on Urbanspoon, sampling the random wonders of their slot machine, trying to find something that would give her a worthwhile cause for mileage. It turns out this city is certainly not lacking in quality barbecue.

I settled on Selma’s Texas Barbecue for many reasons, but mostly because it looked charmingly small-scale and had a cheerful, friendly website that even touts a back story for the restaurant. As anyone who has read my Waffle House article will know, I’m a bit of sucker for tiny little cheap food joints with storied histories as well as tasty food.

Selma’s history is focused on Selma herself, a native of Texas and Arkansas for whom the restaurant models its wholesomely unhealthy Southern cuisine. The food is inexpensive but prepared to very particular specifications. The catfish is farm-raised, the meat slow cooked all day, the sauces mixed in-house. Even the baked goods are homemade, ensuring that patrons can get a fix of Coca-Cola cake and banana pudding alongside their ribs and cornbread.

Western Pennsylvania may not have the barbecue pedigree of the South, but it’s got a hankering for the cuisine all the same. Our neighbors in West Virginia know what they’re doing around a grill pit, and many of them have been kind of enough to spread the wealth into this region. Besides, the slow cooking ways of the Pennsylvania Dutch are not unlike the slow cooking ways of the Deep South. We share an affinity for pork and starches and meals that stretch from late afternoons to nightfall. What we share, like many food cultures, is a desire to sit around all night and converse over full plates of delicious home cooked foods.

Selma’s is very, very low key. You walk in, order your food, grab your cup and fill it up yourself, and take a seat. Someone will eventually bring your food, but while you’re waiting, feel free to educate yourself on the fine sauces offered on every tabletop in the small restaurant. 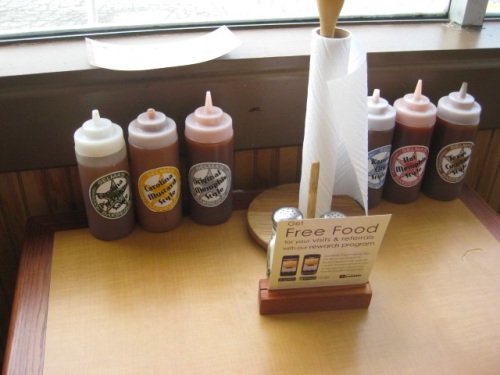 Selma’s even gives you a handy guide to the sauces, including a basic description of flavor and recommendations on what to use each sauce on. Kind of them, certainly, but I had no intention of only trying certain sauces on certain things. If there wasn’t a palate of sauces left on my plate at meal’s end, I had failed some kind of test.

END_OF_DOCUMENT_TOKEN_TO_BE_REPLACED

Posted in Dining Out, Dinnertime!, Food