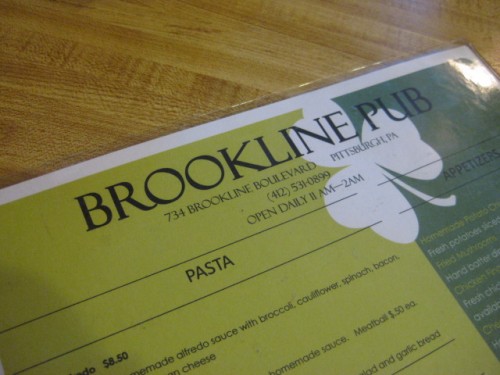 Bar-and-restaurants are not created equal. For every notable, really decent place to grab a brew and some food, there are at least a dozen that are notable only in their place-less, generic nature. These sub-par establishments usually serve the same blend of tasteless, mediocre (and below) food at junk prices to complement whatever beer special is attracting the local population. This isn’t meant as an insult to these places. A perfectly fine watering hole does not guarantee a decent place to eat, but that does not negate the positives of visiting. You just have to keep your expectations in line with where you are.

The problem with setting expectations, however, is that it’s often difficult to discern the good from the bad upon initial glance. Some sparkly, polished, pre-fab pubs offer dismal food offerings, while some of the dingiest, grimiest hole-in-the-walls conceal culinary treasures worthy of frequent visits with or without drinking.

Situated in the middle of the business district on Brookline Boulevard, Brookline Pub certainly has its location going for it. Also to its favor: The multi-room set-up, including a sheltered patio area and an enclosed dedicated non-smoking room. The main area is taken up by a smattering of tables and chairs, with the bar dead center.

As far as general environment, this is the type of place to go drinking, not eating. The main area is large, loud, and smokey, and the non-smoking section is small and rundown. Also, because it is tucked away off to the side, the non-smoking section is seemingly forgettable from a service standpoint. (Although, I will admit, this is more of a service matter than an issue with the layout, which I will get to eventually.)

Given its size, location, and agreeable price-point, it excels as a place to grab a cold one, but as a spot to get some grub, it proved less desirable.

Anyone who has watched a considerable amount of Gordon Ramsey’s Kitchen Nightmares can tell you that one of the main problems found in most mid-level restaurants is that the menu is too large. While a laminated double-sided menu doesn’t seem like it would be huge, Brookline Pub manages to pack a lot of stuff onto both ends, including a list of wing flavors numbering somewhere around twenty. Quantity and variety seem like positives, but so many options give the kitchen little time to specialize and strengthen specific meals. Everything ends up mediocre, and because there is so much of it, that’s a whole lot of mediocre.

Worse still, the mediocre offerings were on classic bar menu items, proving that even something as simple as a chicken wing or pierogi can be undone by lackluster preparation.

Behold, a platter of manufactured pierogies, boiled than slathered with butter and onions. The sheer abundance of onions made the appetizer anything more than a paltry excuse to charge twice the supermarket value for Mrs. T’s. If there’s one thing a place like this should be cooking right, it’s pierogies. Grilled or fried, the result might not have been so spectacularly mundane. 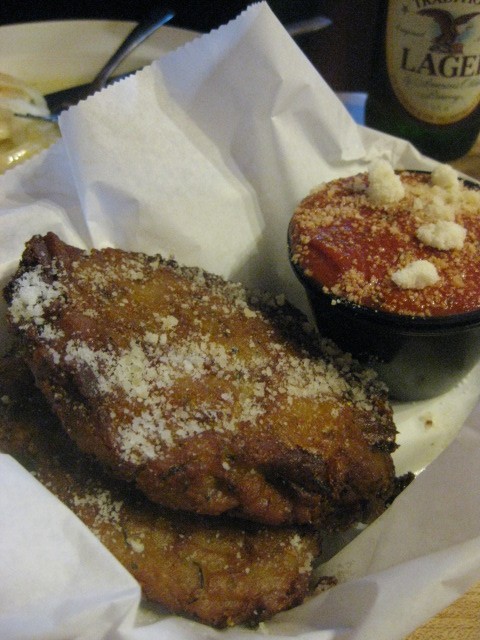 The zucchini fritters looked appealing enough and were served with a generous cup of Parmesan-topped marinara sauce. Sadly, however, the immediate tastiness of the breading gave way to a bland and too-flour-y filling. The little bit of crunch from the breading could not compensate for the overall mealiness and mushiness of the interior. Ample portions of marinara made them edible, but just barely.

A “Southern” hot dog promised a dog smothered in cheese, chili and coleslaw, but the ungodly amount of both toppings pooled above even the rim of the bun. It was a strictly fork-and-napkin deal, disappointing because, well… this is a hot dog. A hot dog. No matter the amount of toppings, you should be able to pick up and bite into a hot dog. (For an example, look no farther than the culinary achievements of Dormont Dogs.)

To make matters worse, while the cheese and chili were understandably standard junk variety, the coleslaw was bargain-basement jarred slop. It was too wet to use as topping (and not Southern-style slaw to boot) and was below generic in every conceivable way, especially in texture. The only positive of the hot dog was the bun, a good, reasonably fresh Italian bread, but it was ruined by the weight and wetness of the toppings. As it was obscured by both a mountain of slop and a soggy pile of bread, I won’t even bother assessing the hot dog. It was a hot dog covered in crap.

With so many flavors to choose from, we felt a responsibility to try the wings. I don’t care much for chicken wings in general – they fall into the same sub-category of meals that crab and lobster do, which is the “so much work for little payoff” category – but I go pretty crazy for a good buffalo sauce on the right bit of chicken. I ordered a half order (1/2 dozen) of buffalo-garlic wings, and they proved to be the most respectable of the choices we made on that visit. There was a fair amount of meat on each wing and a nice chewiness to the cooked exterior. There was a good proportion of sauce to wing, not so much that there was a ton of extra, but not so little that the wings were dry.

The disappointment came in the flavor of the sauce. While I had ordered buffalo-garlic, the wings were decidedly on the hot sauce side of the matter, with not a trace of garlic flavor. I’m not sure if our waitress got the order wrong or if their buffalo sauce is just that poor, but I’m going to guess it was a problem of too many flavors, not enough ways to distinguish them.

We played it fairly safe with our food choices, but each one was a let down. To mess up something like a zucchini fritter is one thing, but a smothered hot dog of such a catastrophic variety seems like a ridiculous failure on the part of the prep staff. The menu doesn’t have to be gourmet, the dishes don’t have to be inventive or original, the ingredients don’t even have to be top notch, but basic preparation and eye toward proportion should still prevail. It looks bad to have something so simple so blundered, and it bring down the estimation of quality toward the rest of  the menu.

The other glaring problem with our meal at Brookline Pub was the service, which could be graciously described as indifferent. Indifferent and slow, very very slow. Slow service isn’t always the fault of the waitstaff, in fact, I’m usually the first to give the benefit of the doubt when it comes to long waits for food, drink replenishment, etc. But when we were left waiting for our check for nearly a half an hour, only to have the waitress come and take our money and then fail to return with change, my understanding reached the limit. After waiting around for another fifteen minutes, we went to the bar to check to see if our waitress was around. We were told she had left.

It’s difficult waitressing a restaurant with as many little outlets as Brookline Pub, and I’m sure we had caught her in the last hour or so of a very long evening of work. I sympathize, I really do. But after treating us with aloof dismissal all night long, the only thing we wanted to do was pay and get out of her hair, and the only thing she really failed at was letting us do just that. One, two, five dollars would have been forgivable, but it was more than that, so I had to get a refund from the bar directly.

Okay environment, below average food, below average service. All bar and restaurants are not created equal. If you’re headed for Brookline Pub, I suggest saving your money for the drink specials and grabbing a bite at one the many other enticing restaurants lining Brookline Boulevard.