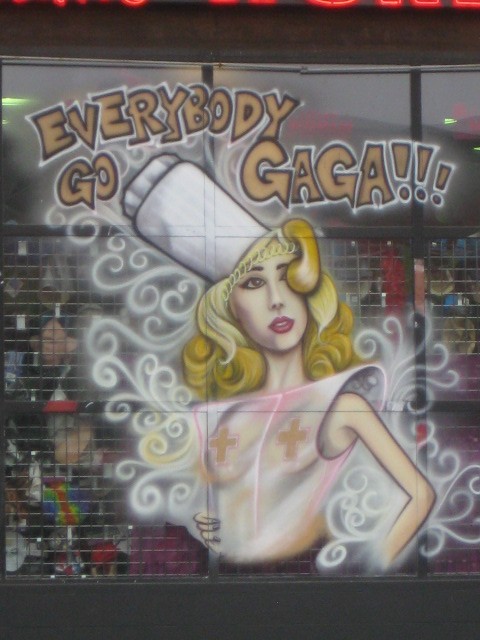 Could it be? Could Lady Gaga be watching over the Strip District? 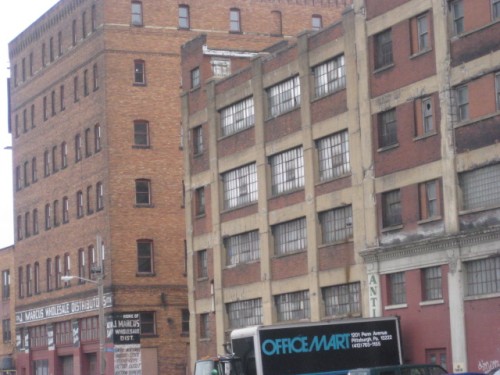 Ah, a post-Thanksgiving Saturday morning in the Strip District. I feared large crowds, but probably due to the cold weather and threat of traffic due to the parade in town, things were pleasantly quieter than usual. I usually have one or two people with me, but with most of my friends still unavailable due to the holiday, I set out by myself. It’s kind of nice to go down there alone: I can go at my own pace, hustle when necessary, meander when desired. 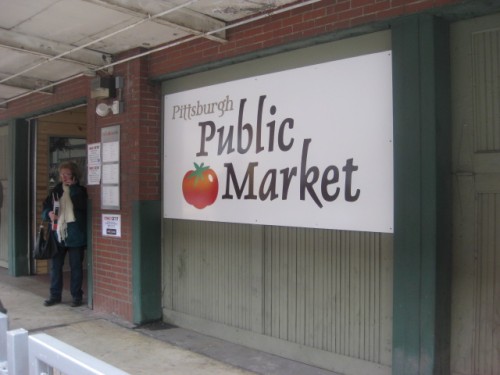 Left to my own planning, I went to several of the usual places, while adding on a few extra stops along the way, including another visit to the Pittsburgh Public Market. (The image on the left is my addition to what is now a generic shot of the market’s sign.) At the market, I picked up a badly needed cup of coffee, some shiitake mushrooms, and a gourmet marshmallow from the Pittsburgh Marshmallow Factory.

On the right, the Bananas Foster marshmallow with a dusting of graham cracker topping. On the left, a “failed” flavor, Guinness. The guy running the stand explained that the while the marshmallow itself wasn’t inedible by any means, the Guinness flavor just wasn’t strong enough to resonate in the produced sweet. He told me of a possible future marshmallow utilizing the strong flavor of the East End Brewing Company’s Big Hop. I can only say that I strongly hope he goes through with that experiment, because the Guinness marshmallow, while admittedly weak on the flavor of the brew, definitely had a hint of alcohol flavor that was very pleasing.

﻿I enjoyed half the Guinness marshmallow with my cup of coffee while outside the market, then moved on to the bulk of my shopping.

Given my penchant for spices and seasonings, it might be a surprise that I’ve never paid a proper visit to Penzey’s Spices. I think I might have been worried that I wouldn’t be able to leave without spending a minimum of fifty bucks. Well, I’m glad I took that risk, cause I was able to go crazy over the inventory while restraining my spending. I browsed the seasoning mixes, the baking spices, and considered options for potential future gift buying. But mostly, I tried to keep my choices to three items. 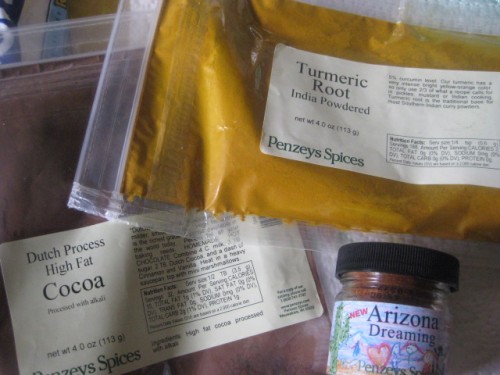 My purchases from Penzey’s. The turmeric is the most vibrantly hued I’ve ever seen. The Arizona Dreaming seasoning is a spicy blend that works especially well in Mexican and Cajun cuisine.

I made my usual stops at Lotus (for tofu and garlic chili sauce), Stan’s (for as much produce as I can carry), and, of course, Reyna’s. 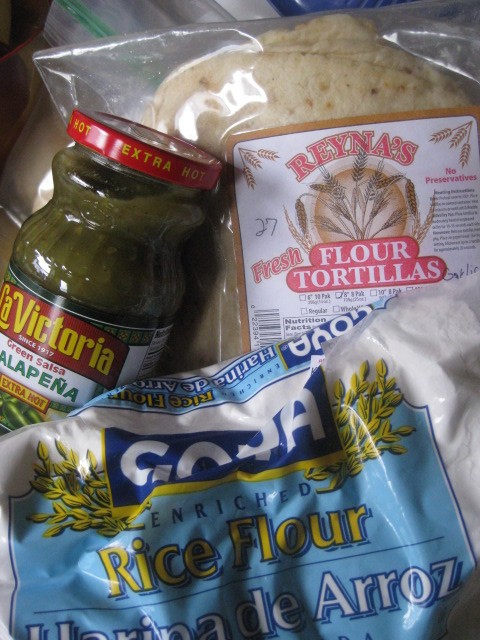 My purchases from Reyna’s. I’ve been meaning to pick up a good hot jalapeno salsa for a while, and because of the $10 buck minimum for debit card purchases, I finally did. The rice flour was purchased for the same reason, and if anyone has a good use for the flour let me know. The in-house made tortillas were still warm when I picked them up. Hot, actually. It was tempting to keep them bundled underneath my sweater for extra heat on the long walk back to the Wood Street T station downtown. (If you live in the area and have not had the pleasure of Reyna’s tortillas, make a point of getting down there and picking some up. They’re about as perfect as tortillas get: fluffy, flavorful, and, of course, very fresh.)

All in all, a pretty successful outing. I imagine that most people would prefer the Strip on sunny, warm mornings, but there really is something about a cold, gray late November amidst the markets that is very appealing. Between the hot coffee and the brisk pace of my endeavor, I staved off the chill and lugged all my purchases home.