Sometimes a coupon doesn’t save you from a non descript dinner.

Posted on October 7, 2010 by wyzeats | 2 Comments
Sometimes you walk into a restaurant for entirely the wrong motivations. 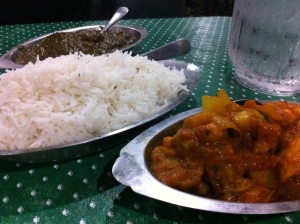 Sometimes you walk out of a restaurant understanding why you SHOULD have listened to your more evolved palette, rather than your moth eaten wallet.
Such was the case when Emily sent me a text this past Sunday. She had obtained a sterling BOGO Coupon for the Maharaja Restaurant and Lounge at the Day’s Inn on Banksville Road, just past Dormont and a scooch away from Downtown Pittsburgh.  Usually our local Indian haunt is the even closer Namaste in Banksville Plaza, which to this point….has never served us wrong, literally AND figuratively.
Coupon in hand we arrived at the local Days Inn Hotel where several sets of doorways and an oddball retro juice machine greeted us on our journey down a seemingly unending hallway, bringing us ever slowly to the expansive dining room of the Days Inn, which opens to become the Maharaja Restaurant Interior.  It’s a set up that works wonders, surely for both clientele of the Hotel AND of course the owners, as the vast and elaborate buffet is an ever popular and convenient stop for diners simply passing by the Hotel or staying over a few days.
Listen, at this point you’ll surely note that this journal entry to this point has more to do with the ambient setting and peculiarity of the restaurant than, well….the restaurant’s product itself.  This isn’t entirely a negative, but at the same time I have to be forthright in detailing that I actually can’t recall…..any of the details of the meal itself.  In fact, given a fully loaded smoothie or two, I sincerely doubt I could even tell you the dish I actually ordered.
Unfortunately, it was THAT forgettable.  Not as forgettable were the untidy splotchy stains that leapt out at my peepers when I peered a bit downwards to rest my hat on the dining booth seat next to me.

Also not very forgettable was the odd way in which our food itself was presented, in a fashion where it simply seemed…”dropped off” with a smile, but sans actual serving plates.  When you’re dining at an Indian locale the metal serving dishes really aren’t ideal or practical for self serve, let alone if you choose to sample some of your dining partner’s wares.
That said, the Orange Coated Veggie Platter that I ordered (NOT even close to it’s actual name, I guarantee you!) wasn’t notable, desirable, or large enough to be shared in any form or fashion with my Chow Cohort, cept for a

forkful here or there.  Less notable was the Green Puree of Goop (now that SHOULD be the actual name of this delish entree!) that Emily ordered and had plopped down in front of her hungry eyes.  My eyes….eyeballing that, not so much, but she seemed to find it worthy of finishing, up until we ran out of our very dry and small order of Garlic Naan that we often order as a staple of our Indian outings up to this date.

Contrary to what it MAY sound, I don’t want to lead anyone AWAY from sampling the Maharaja, not in the least.  The owner/server seemed to have a delightful and relaxed demeanor (though this could ALSO be confused as a psychotic shit eating grin given the wrong intent!) in how he related to not only us, but to the many regulars that have apparently developed a very carefree and enjoyable rapport that most restaurants couldn’t ever manifest in such a natural way.  At the end of paying our check, the owner, almost seen by my iffy stomach as a taunt or challenge as much as a potential positive revisit, ripped Emily’s BOGO coupon a bit, and told us that we were free to come back for another usage and a solid discount on our very next visit.
All in all…..given a BOGO Coupon, no LITERALLY….we’ll give this coupon to you if you simply send us an email, the Maharaja isn’t a bad dining experience at all, but don’t go walking down that long dark Days Inn Hallway expecting ample portions or spinach entrees that don’t resemble a bad batch of meconium…….on it’s WORST day.

2 responses to “Sometimes a coupon doesn’t save you from a non descript dinner.”